The kids must have had a more riotous party than us on their vacation to Utah because it took them a good four days longer to recover from all the fun!  Finally after a really chill weekend, we are all feeling back on track. Special thanks to our family in Utah who helped with the kids; Mom and Owen, Dawn and Ken, Christina and Dave, and Jenni and Mike.  We REALLY appreciate you taking such great care of the kids and it was especially nice to know they were having a blast with cousins and making great memories.  We packed a lot of sights into our 10 days in France, staying in a new city every night until the final three nights in Paris. Rather than bore you with a long travel-log, I’ll just give the highlights in pictures…

First night in Nyon, Switzerland after a 26 hour day of travel.  The jet lag was quite painful and my legs felt five pounds heavier from retained water, so my run was slow and short.  We stayed with Raeburn’s friends Giselle and Pierre and were treated to kind hospitality and yummy meals!

Our run along Lake Geneva. 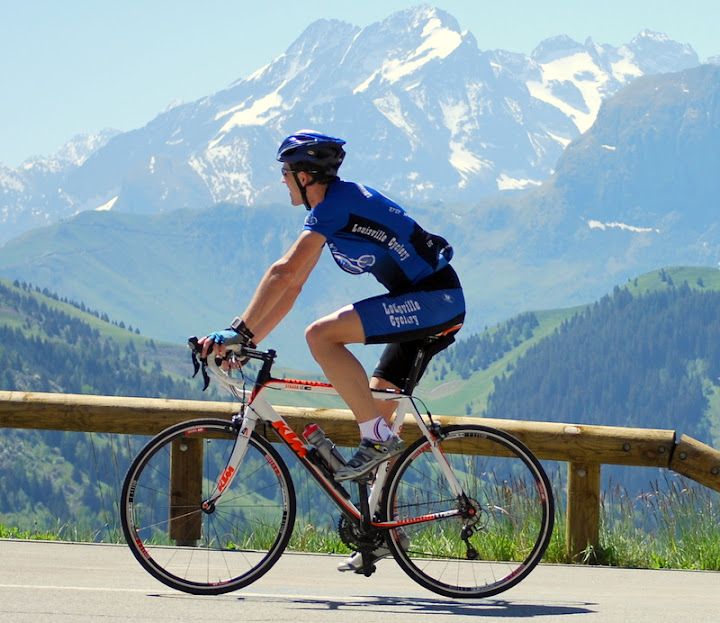 One of my favorite things about France: amazing pastries!!!

Soaking my legs in the river.

View from our hotel Room in l’Isle-sur-la-Sourge

Matt and Ash 3k from the top of Mont Ventoux

That deliciously expensive candy at the top of Mont Ventoux fueled me the remaining 50K (making it a total of 85K for the day) of scavenger hunt riding to our eventual destination.  Matt described it as “a sordid tale that includes ‘the roads less traveled’, an internet cafe, dad’s loss of faith in the GPS system, and a strawberry round-about.”  My favorite part was watching Aaron and Matt attempt to speak to the locals in Carpentras automatically reverting to their only non-English language, Spanish and not having much luck with that either.  Its a good thing French people understand hand gestures and body language quite well or we’d still be lost in Southern France.

Roman aqueduct, Pont du Gard built around the time of Christ.  Cold river below where we bathed after our long day of riding (notice the nice biking shorts tan line).

Ancient fortified city of Carcasonne.  People still live there today and there is a Best Western inside the city too in case you wanted affordable lodging with the protection of two stone walls  and a moat surrounding you.

On a beautiful, misty day

Cute little castle we stayed in.

Peaceful pond in the back yard.

The whole crew in front of Château de Chambord built to serve as a hunting lodge for King François I.  A mere 440 rooms, 365 fireplaces, 84 staircases and more than 800 sculpted columns.  Apparently French kings were insistent upon having modest vacation homes.

Hmmmm…where shall we go running today?  Oh, how ’bout the gardens of Versailles?!  Nine miles and we barely scratched the surface.

Aaron running through the corner of Versailles, Hameau de la reine, or “The Queen’s Hamlet” where Marie Antionette went to  pretend to be a peasant…just for fun.

Fresh market down the street from our Hotel in Paris.  YUM!

Of course you cant go to Paris without seeing the Mona Lisa.

After our Sunday lunch in Jardin du Luxembourg with (of course) a statue of a naked child in the background.  There must be at least one million naked statues in Paris.

Fresh spices for sale in the street market smelled wonderful!

And there you have it; our trip to France in pictures.  It  turned out to be everything I expected, and more!  Thanks, Dad for planning and arranging everything for our exhaustingly fun adventure!!  It was great to spend time with family and learn about the French history while experiencing the beauty.  Good times!

Get My Husband’s Bestseller